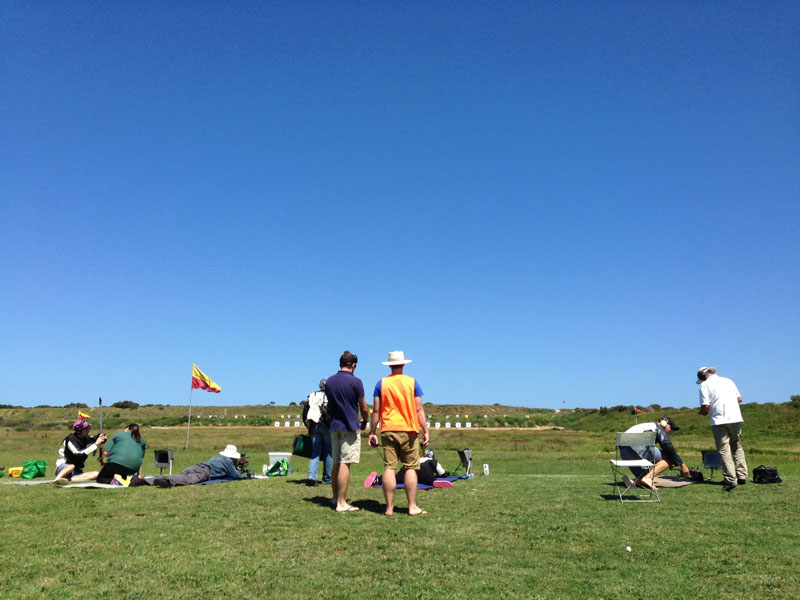 The Anzac Range at the Malabar Headland is the Club's home ground. We meet every Saturday throughout the year. Rifles used are full-bore 7.62 Target Rifles, and we shoot at ranges from 300m to 800m, in all weathers. The ANZAC range has been used for target shooting since the 1850s.

The range is angled so that we shoot towards the south east, and the wind is usually kindly: fairly steady, generally from the East. All other variations are possible, and days of straight-up-and down (fishtailing), with sudden shifts of 90 degrees to left and right, are not unknown, so it pays not to be complacent and to watch the flags.

The club house occupies two of the club units in the top row of club-houses at the Anzac Range. There is a substantial locker area with a cleaning/work table and a snooker table, and a kitchen, bathroom with shower, a library and a lounge with a TV. The walls are literally hung with the dozens of trophy pennants gained by the club over many years of illustrious shooting and the trophies and photographs to go with it. There are re-loading facilities for shooters who wish to assemble their own ammunition.

The Club has jackets, slings, mats, telescopes and 7.62 rifles available for members to use until such time as they acquire their own gear. The club is an affiliate of the Metropolitan District Rifle Association, which organises the annual "Grade" team shooting competition shot every month or so throughout the year, and two Opens, one on Australia Day, the other on Anzac Day. We are also affiliated with the New South Wales Rifle Association, the governing body of all rifle shooting in New South Wales, and indirectly with the national body, the National Rifle Association of Australia.