There are two sights - one at the end of the barrel, usually a ring of 3-4mm internal diameter. Another at the rear of the rifle, near the eye. The further apart these are, the better. The rear sight is always a round hole about 1mm across. The target itself has a large black solid circle on it, (the Aiming Mark) and the idea is to line up the circle, within the round ring, within the round hole. The human eye's pupil is also round, and is very good at circle-within-circle discrimination, and extreme accuracy is possible with these relatively primitive aids. 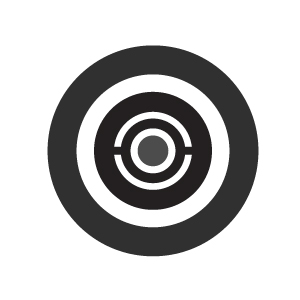 If you can see this, and your sights are aligned correctly for the prevailing conditions, you are going to get a bull. The outer-ring is the rear sight, the next ring is the tunnel within which the fore-sight sits, suspended by two little horizontal bars. The inner-most spot is the black mark on the target - somewhat greyed-out - it is a long way away.

Shot prone - that is lying down on one's front - using open sights - no telescopic sights.

Competitions are typically two sighters (to adjust for wind and elevation) followed by 10 to count. The sighters are convertible - that is, if they are good shots they can be counted as scoring shots. Targets are marked with concentric rings, with the innermost, the bull, scoring 5, so in a ten-shot match the highest possible score is 50. This feat is known as a "possible", and is something to be devoutly wished-for. There is a smaller, inner-ring, used as a tie-breaker. Shots inside this are scored as a "V", and are called "Vs" or "Centre Bulls". They still count as 5 towards the score.

Open Sights or "iron sights" means that magnifying optics, such as in telescope sights, are not allowed. Adjustments for poor eyesight are allowed, and how these adjustments are made is occasionally controversial, but the principle is clear - optics must not be used that effectively create a telescope.